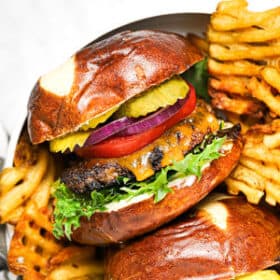 Burgers aren't just for summer time anymore! No grill? No problem! These smash burgers cook up thin and crispy in sizzling butter heated in a piping hot cast iron skillet right on your stove! They are simple (just ground beef and salt!) have perfectly crisp, scraggly edges and that signature butter burger flavor - and the best part is, you can get them on the dinner table in about 15 minutes!

80/20 ground beef is the best lean to fat ratio for this easy smash burger recipe. Anything leaner and the burgers will end up dry and flavorless. Anything with more fat could work but might end up being a little too greasy as it's cooked in the butter. However, fat = flavor and in this smash burger recipe that concept is paramount!

Smash the burgers until they are about half an inch larger than the bun you're serving them on, as they will shrink as they cook. Smashing them slightly larger will ensure that even when they shrink they will still cover the surface area of your bun!

Give the burgers a smash in one fluid motion, and don't smash them again after that. After the initial smash, any flattening of the burger is just going to smash all the juices out of it. Smash once, then flip, and add cheese!

After adding the shredded cheese to the burgers, cover the cast iron pan with a large plate (or a lid if it came with one) for the last minute or so of cooking. This will allow the cheese to melt but keep the burgers nice and crispy.