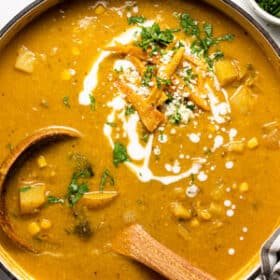 This hearty, comforting, Creamy Vegan Corn Chowder is prepared with simple ingredients and takes about 45 minutes to throw together. It's dairy-free and nut-free but still luxuriously creamy and loaded with flavor!

Season. Season. Season. And then season some more. This recipe is super simple which means salt and pepper are going to be your best friends. They will amplify the flavor of the corn immensely and do a great job at showcasing the fresh flavors! Be sure to taste this soup frequently throughout the cooking process and add more salt and pepper to taste.

Poblano peppers are slightly spicy compared to a plain old bell pepper or banana pepper, but they aren't nearly as hot as a jalapeno. After charring the poblanos, I found that they added just the right amount of smoky heat to the soup, without it being too spicy for my 4-year-old. If you have picky eaters who are averse to spice, feel free to use bell peppers in place of the poblanos. You can roast them in the exact same way!

If you don't have time to roast peppers, you can just dice the peppers and saute them along with the onion. You won't get that same smoky flavor as from the roasted peppers, but this vegan corn chowder will still taste great and it will save you some prep time!